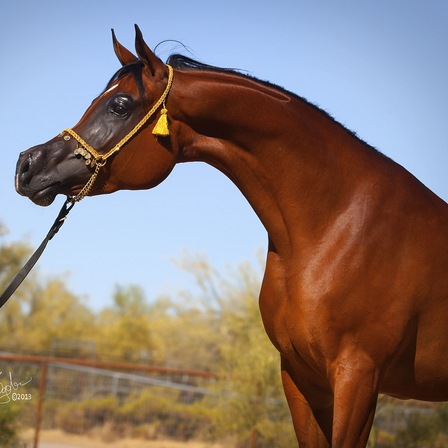 Time and again it has been proven that what makes a superior Egyptian Arabian is an amalgam of generations of the best. Such is the legacy of former Imperial Egyptian stud. When it ceased operations, breeders worldwide scrambled for the best of its breeding, and ESA Aminaah is one example of generations of quality Imperial breeding. Bred by Eastern Star Arabians, the recipe for ESA Aminaah is essentially the of blending Ansata, Gleannloch and Babson, the same ingredients assembled into A Illuminatus's heritage. From four grey grandparents, ESA Aminaah reverts to the stunning mahogany bay color of her world-renowned dam line to Deenaa. ESA Aminaah's pedigree boasts many US National winners as well as being a granddaughter of US Egyptian Event Supreme Champion and Reserve World Champion Imperial Baarez. ESA Aminaah won US Egyptian Event Yearling Futurity Champion followed by Arabian Breeders World Cup Top Five Junior Mare. Aside from her astounding titles, ESA Aminaah brings into the broodmare band a mare of beauty, quality and perhaps one of the most desirable mares to be celebrated as the dam of A Illuminatus's first filly, A Anisa, a 2014 grey of indelible splendor.